KICK offers a look at serious subject matter yet, it is also deeply funny and heartwarming.

It can be an effective way to begin a dialogue on campus, in your company or through theatre in your community.

“… Change begins with people like you who are willing to challenge the status quo.”  Sherrod Brown, United States Senator

Educate and help begin necessary dialogue among your student body. Bring KICK to your campus. While this play offers a look at serious subject matter, it is also deeply funny and heartwarming. It is an effective way to begin a dialogue on campus, but you don't have to do it alone our team and partners will support you each step of the way.

Corporate Social Responsibility demands have never been more necessary than they are today.  Use Kick as an opportunity to open the dialogue in your company to make social change.

While this play offers a look at serious subject matter, it is also deeply funny and heartwarming. Thank you for being committed to using theater as a tool of social change.

"On her way to her first big New York audition," press notes state, "dancer Bernie O'Connell is tricked into a car and attacked in a vacant lot off the Brooklyn Queens Expressway. [The play] follows Bernie from a kick-line to A Chorus Line to Hollywood and back as she picks up the pieces and finds the glue to put herself back together."

In an earlier statement director, Tony Nominee, Lynne Taylor-Corbett said, "We follow this ex-dancer through a decades-long roller coaster ride in this story about faith, relationships, sexuality and spiritual awaking. From raped teenager, through the age of AIDS and homophobia, to empowered Interfaith Minister and grandmother of three, Joanna Rush entertains and weaves a tale with such wisdom and humor. I am so proud that this play has opened a conversation with many men. One fraternity changed their mission statement to include “respect for women.” We need this conversation.

KICK, originally called Asking For It, won rave reviews and four stars from Time Out when it was originally presented at the New York International Fringe Festival. Joanna was nominated in 2016 for an Off Broadway Alliance OBA Award for “Best Performance in a Solo Play.”

Shea Center for the Performing Arts

David Rubenstein Atrium at Lincoln Center for the Performing Arts

All For One Festival – Cherry Lane Theater

The Kirk at the invitation of Eduardo Machado & Intar

United Nations Council for the Empowerment of Women

"This is how theater should connect to people."  — Margo Jefferson, Pulitzer Prize winning critic

“…drama, comedy, honesty and more… allows the audience to feel, rather than watch!” — nytheatre.com

"Joanna's work, both as written and performed, makes for a well balanced evening of theater – touching, entertaining and thought provoking. The audiences at Gloucester Stage loved it... and are still talking about it."  — Eric C. Engel  Artistic Director, Gloucester Stage Company; Director, Memorial Hall and College Theater Venues; Office for the Arts at Harvard

"With passion and wit, Joanna Rush lets us know the pain of being the hot girl in town. A must see lesson on sexism."  — Eduardo Machado, Playwright, Artistic Director of Intar Theatre

...Vigorously fleshed out characters and a witty script, this performance should not be overlooked!"

"Finding the truth of one's life in a culture of lies... a powerful piece."  — BBC Radio 4

"A consummate artist, Joanna Rush journeys through her life experience with tremendous insight,

incredible dramatic scope and humor. So much is revealed that one has to sit and take stock of

KICK— "BOTTOM LINE: A tender yet powerful telling of a life lived between God, troglodytes and the search for (self)love. Bernie O'Connell (Joanna Rush), a dancer, makes her way to her first New York audition. Tricked into a car by a most welcoming stranger and then attacked in a vacant lot off the Brooklyn Queens Expressway—sadly, a first of many attacks—Bernie goes from a kick-line to A Chorus Line to Hollywood and back while attempting to put herself back together...." [Read Full Article]

Theater Pizzazz  Sundays at St. Luke's with KICK — "A one-woman show? Rather, Kick is a kaleidoscope of finely etched characters and a tour de force for the astonishingly talented Joanna Rush who both wrote and performs it. This is the memoir of a full life condensed to 90 minutes of laugh-out-loud misadventures. There doesn’t appear to be a trajectory except the chronological, but there is as will be made clear at the end...." [Read Full Article]

From writing to dancing to acting, Joanna is an incredible talent!

Two-time Tony Award Nominee directs, choreographs and advises like no other!

Unable to Attend the Next Show? or Want to share the experience?

The book is now available!

Available on Amazon or at Barnes and Noble 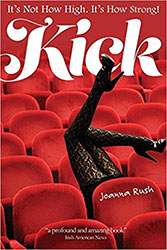 We love to share time with our partners, supporters and friends before or after the show, below we share a few with you.

Preview a sampling of KICK here

Opening night of our

After a special performance for Rockette's Alumni Night

Mariska Hargitay and Joanna, after a great performance for the All For One Festival 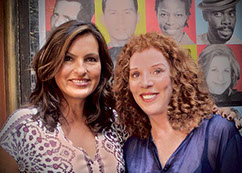 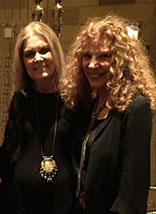 KICK...theatre that chooses to make a social difference!